'Thank you for the (HUGE) donation you made online'

said the e mail I received today from the breast Cancer Foundation NZ.
This really is a brief, almost ramble free, newsletter. I just want to let you know that we managed to raise  $4000 for Breast Cancer Research NZ last Thursday, Friday and  Saturday. Our sale yarn was severely depleted come Saturday and within 15 minutes of opening the store, we were totally cleaned out. I feared I might get lynched by annoyed customers, thankfully, that wasn't the case. Here's a  photograph of Kate, who had traveled down from  Kerikeri early Saturday morning. She managed to grab a few balls to add to her stash; that  bag really is filled to the brim with wool. 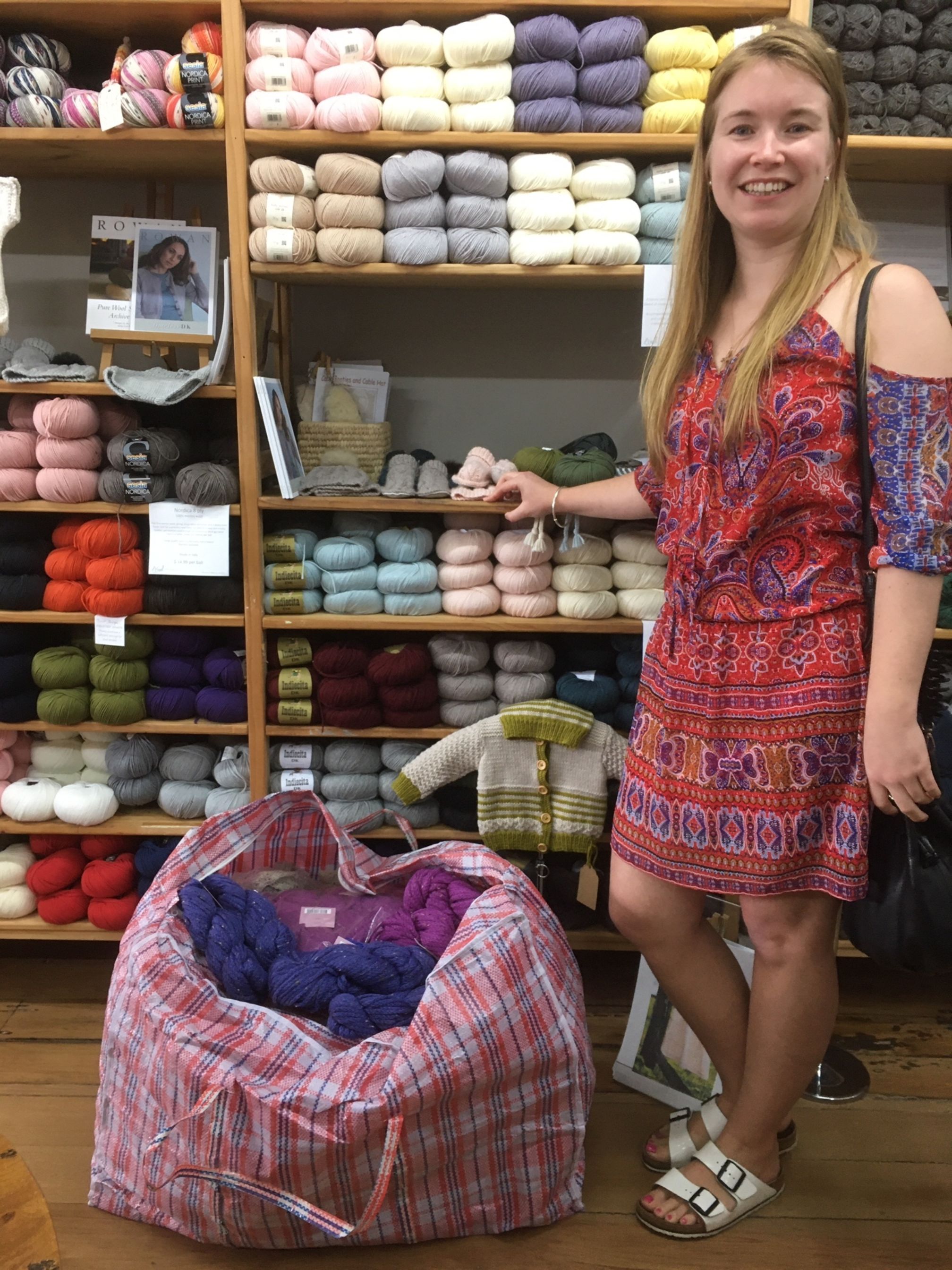 And, I would like to give a huge thank you to my suppliers who sent me box after box of wool, totally free of charge, and given so willingly. Brad from Trendy Trims, Patty and Oliver from Wentworth Distributors, Kylie and Glenn from  Touch Yarns, Lisa from  Lisafdesign and Jess and Jo from Ascot Lane Distributors.  Maybe I'll send you a similar cheeky request this time next year!
Now, just a little ramble. I haven't been in work today. My mum has just arrived from  England. It's exactly a year since my dad passed away and I really wanted her here with us at this poignant time. Her flight was due to arrive mid morning, and I was up extra early getting my house neat and tidy. I decided to bake a cake.

I am not much of a baker, I have coeliac disease so cannot eat wheat or ingredients containing gluten. There's a bit of an art to gluten free baking, I have tried many times and have more than my fair share of disasters. I'd rather spend my spare time knitting. Anyway, I turned to a page in one of my Nigel Slater recipe books. The heading said 'a simple cake to serve with summer fruit'. As I turned the oven on to preheat, I noted it was only  7.30, I had heaps of time. I reached my ingredients from the pantry: eggs, butter, castor sugar, lemons, dried apricots and flour. This is where the problems started.  I could have sworn I had some gluten free flour...I did not. OK, the dog needed a walk so a brisk trot up to the supermarket would 'kill two birds with one stone'. It was bucketing down with rain and we both got drenched. I suspect Harry would have preferred to stay tucked up in his basket.

Anyway, by the time we returned the the oven had been preheating for well over an hour. I had to be leaving for the airport no later than 10 am, but there was still plenty of time to spare. Back to the cake.  First step, cream softened butter and castor sugar together until light and fluffy. My butter was rock hard. I popped some water in a pan,and set it on the stove, with a bowl of solid butter sitting in the water. I wandered off to do a few jobs, only to return to a bowl of melted butter. OK, lets start again. I weighed out the remaining butter from the butter dish. Thankfully there was exactly 250 g. I popped the butter into a second bowl and  rested it in the pan of hot water, I wandered off to do more jobs. I returned to a second bowl of melted butter. By this stage the first bowl of butter had solidified ever so slightly. With great gusto I beat  the living daylights out of the mixture and my butter and sugar was definitely the required level of lightness  and fluffiness. I followed Nigel's instructions to the letter and finally opened the oven door to deposit my cake onto the shelf. The oven was not hot, it was barely warm. Somehow, goodness knows how, I had turned the oven off. It was now 9.25 am. My cake needed to bake for 35 minutes and I had to be out of the door on the dot of 10. What a palaver this baking business is!  The cake was shoved in the lukewarm oven and the temperature cranked well up. The kitchen looked like a bomb had hit it. I rammed all the messy baking paraphernalia into the dishwasher, wiped the cake mix splatters off the bench top and walls and with minutes to spare  jumped into the shower. On the dot of 10 I was ready to leave. I very much doubted my cake was cooked through, however, I really did have to be on my way to the airport. Rather than take a peek at my cake I decided to turn off the oven and hope the cake would continue to bake as the temperature dropped.

Mum was safely collected from the airport and after a quick cup of tea I told her to go to bed to catch up on some much needed sleep.The house was quiet and I had nothing to do. I spied my second bowl of  melted, but now solidified, butter on the bench. It dawned on me that I had left a cake in the oven. Well, the cake  had definitely continued to bake once I had turned the oven off, it was now rather  burnt on top. My husband always snorts when he views my baking efforts. His usual retort is 'well I suppose we can cut the top off and serve it with custard'.

I had sufficient ingredients to make a second cake, so while mum slept, I spent a leisurely hour or so in the kitchen. Thankfully, my second attempt was way more successful. Neil, my husband, was incredibly impressed, but his compliments soon dried up as he made a round of toast, only to discover we had  no butter left in the butter dish! 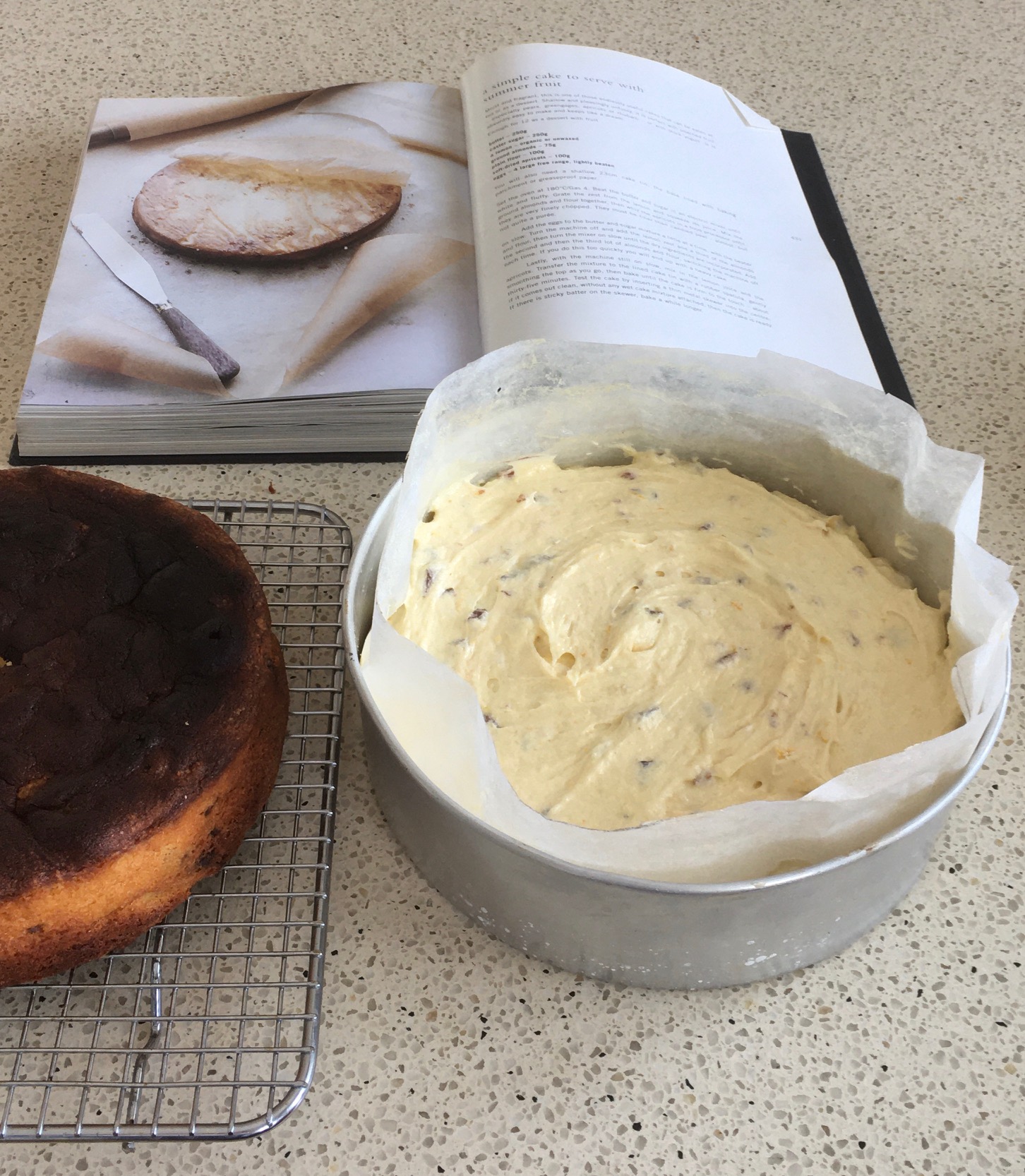 Knitting is way easier than baking!

Well that's all for from me for now. It's been a long, emotional day and I need to wind down  with my knitting, a cup of tea and a wee slice of perfectly cooked (second time around) cake!

No Products in the Cart