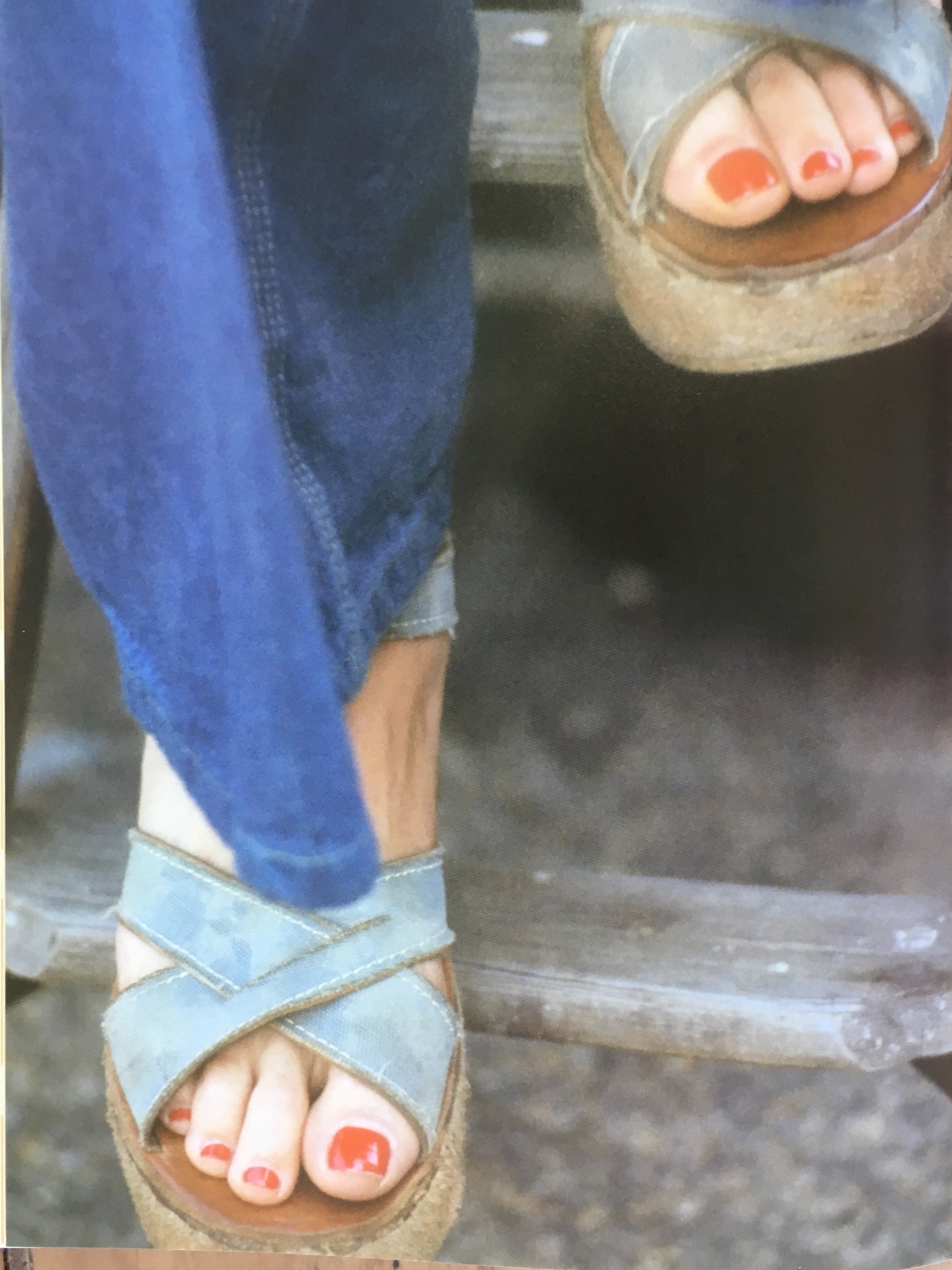 Classic 70's.... Cork platformed sandals,
flared jeans and twisted ankles
I was an extremely solitary child, not really very lonely, but happy with my own company and able to entertain myself. Having extremely frugal parents it’s probably a good job that I was able to make my own entertainment.
The 1970’s spanned most of my primary school education and some of my secondary school years. The 1970’s was a decade like no other, it was packed with innovation and excitement and for ‘most’ children it was simply fabulous. Groups would gather in the playground to listen to some affluent (spoilt) kid play David Bowies Space Oddity on a Stylaphone. Promoted by the bubbly and extremely out going Rolf Harris, any child who managed to have this bestselling early 1970’s electronic organ went right to the top of the playground popularity stakes. Girls would have Clacker competitions. Clackers, also known as Klinkies or Ker-knockers were two hard plastic balls on short strings and joined by a small plastic handle. The sound of the furious clacking as the balls bounced against each other was frequently interrupted by a howl of pain as the missiles became tangled and inflicted a great deal of pain on hands and wrists. I was incredibly relieved when my primary school banned them due to the high injury rate. As I was not part of the Clacker Group, I hoped that any new group that formed may just include me.

In my final year of primary school, I had my moment of glory. It was 1974, Abba had just swept to victory at the Eurovision Song Contest with Waterloo. Abbamania had just begun. As myself, and my classmates were just about to leave Peacefield Primary School and head off to secondary school, we had to perform on the school stage, in the obligatory leavers assemble. I wasn’t expecting too much. Always being the last to be picked for the netball team, never getting a part in the Christmas Nativity and sitting alone on the school bus did not instill me with great confidence in my popularity and performing skills. I could not have been more wrong! The two most popular boys in the class asked myself and my best (only) friend, Lydia Massey, to perform Waterloo, dressed up as Benny, Bjorn, Agnetha and Anni-Frid. I was so excited, especially as Lydia was a cool kid and would be able to loan me the platform shoes, boob tube and bell bottomed shiny trousers.  I would look amazing and would soar into the stratosphere on the popularity scale. Actually, I didn’t reach the stratosphere, and was brought down to earth with an almighty bump. Us two girls were to dress as Benny and Bjorn, the boys were to be Agnetha and Anni-Frid. I was so upset, I looked an absolute twit.  In my brother’s old corduroy waistcoat, grey school trousers and with painted on beard and moustache, I was finally part of a group, but it certainly was not one I wanted any part of. Incidentally in adult life both myself and my daughters have become avid Abba fans, and adore playing our collection of Abba Vinyl or discussing lyrics and instrumentals. 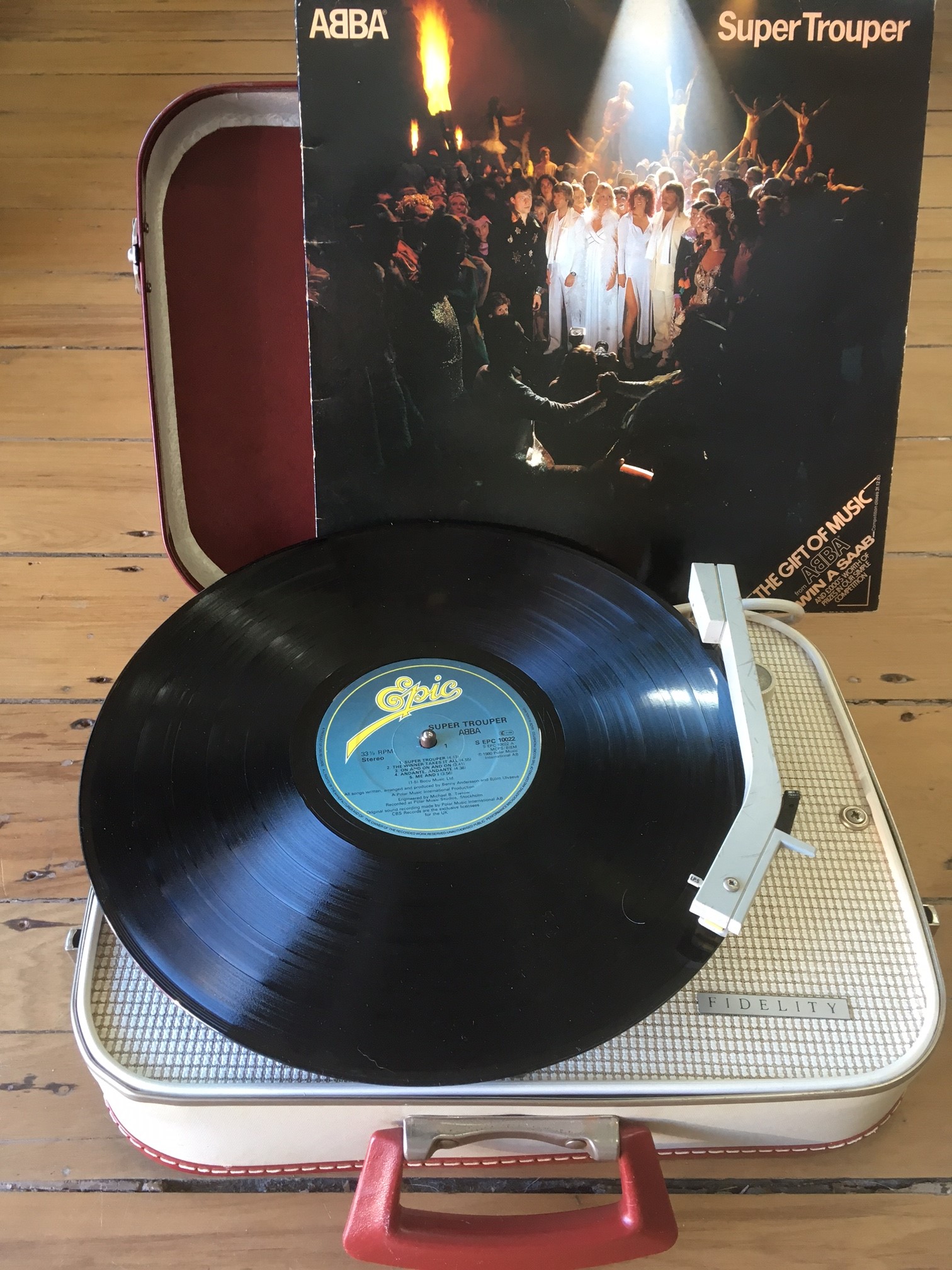 What’s all this got to do with a knitting newsletter, I hear you ask. Well I firmly lay the blame for my exclusion from all the excitement the 1970’s had to offer on my mum’s hand knitting. The cool kids went to C and A for their clothes, or at least the hipster market stall that had the latest styles in flared jeans. They bought their platform shoes from Dolcis and had their hair styled at a salon.  My pudding bowl cut was courtesy of the lady who worked from her front room and specialised in shampoos and sets. I stood out like a sore thumb. My sensible shoes, my purple crimplene pinafore dress, my dodgy haircut and my blasted hand knitted polo neck jumpers. I hated my polo neck jumpers. Mum always cast off to tightly, and, as they were made of acrylic, I swear they squeaked as I tugged them over my head. Her colour choice was, however, right on trend. One was purple, another brown and then I had an orange hand me down from my sister. What child in their right mind would want to include me in their incredible groovy 1970’s experience? It’s a damn good job I didn’t really mind been alone. I enjoyed solitary skateboarding, I bounced to my heart’s content on my orange Space Hopper, I listened, alone, to Goodbye Yellow Brick Road, Tubular Bells and Disco Hits 1975. I was addicted to the hit TV show, Charlies Angels and of course I wanted to look like Farrah Fawcett. Judging by the mass appearance of Farrah hairstyles at my new secondary school, so did every other impressionable twelve-year-old girl. Even had my mum allowed it, and been willing to pay a large sum of money to some posh hair salon, there was not a ‘cat in hells chance’ my short brown hair could be transformed into Farrah’s flowing, flicked back locks. I bet Farrah didn’t have to suffer the humiliation of wearing knitted acrylic sweaters as a child. YES, I FIRMLY BELIEVE THAT MY OSTRACISATION FROM THAT FABULOUS DECADE, THE 1970’S, IS ENTIRELY DOWN TO MY MOTHERS INSISTENCE THAT SHE SENDS HER YOUNGEST AMD MOST INSECURE DAUGHTER OFF TO SCHOOL LOOKING LIKE A COMPLETE LOOSER.

My mum’s hand knitting did come into its own as the 1970’s was drawing to an end. I had become more confident, had miraculously gained a great group of school friends and my dodgy short haircut had grown into something resembling the style worn by Lady Diana in the early 1980’s. This reversal was, I believe due to my mum’s ability to knit a shapeless and prickly mohair sweater in less than a week. Mohair sweaters were all the rage and I was one of the first kids in the class to own such an important trend setting item of clothing. I felt amazing as I bopped (danced) away to The Bee Gees and the Bay City Rollers at the school Youth Club. I had suddenly become one of the Popular’s. Who would have thought that a few balls of mohair and a mother who could knit at lightening speed would manage to turn an ugly duckling into a confident, and most importantly, a popular swan?
I hope I raised a bit of a giggle with my mohair sweater memories. I frequently spend time in the shop swapping ‘mohair jumper memories’.   Those of us in our late 40’s and early 50’s will remember our fluffy and itchy mohair sweaters and cardigans with great fondness, and you know what?... we looked and felt absolutely fabulous and them.
I have just completed a sweater and it is on display in the shop. It’s made from brushed Baby Alpaca, which is way softer than those incredibly scratchy and prickly mohair yarns. My new design features ‘dolman sleeves’, which some of you may know as ‘bat wing’ sleeves (Dolman sounds way more sophisticated). As you may have guessed I got my inspiration from the memorable and extremely stylish mohair sweaters from my mid teens. As I have been knitting away at the shop, I have found customers comments highly amusing. The young and lovely girls comment on how trendy my design is and how they are going to pester their mums to make them one. Ladies similar in age to myself, after having a good giggle, show interest and enthusiasm. They realise my design is rather lovely and incredibly wearable. I know there’s a saying ‘if you wore it first time around then you shouldn’t wear it when it comes around again’, well I will disagree. I will certainly be wearing this sweater when it goes a little cooler. You may find me bopping around the shop to the sound of Abba, Fleetwood Mac or the Bee Gees. If any of you have any special Charlies Angels memories I will turn the music down, pop the kettle on, make a us a cup of tea. We can swap Farrah Fawcett stories and if any of you had a successful Farrah hairstyle I would love to see some photo’s! 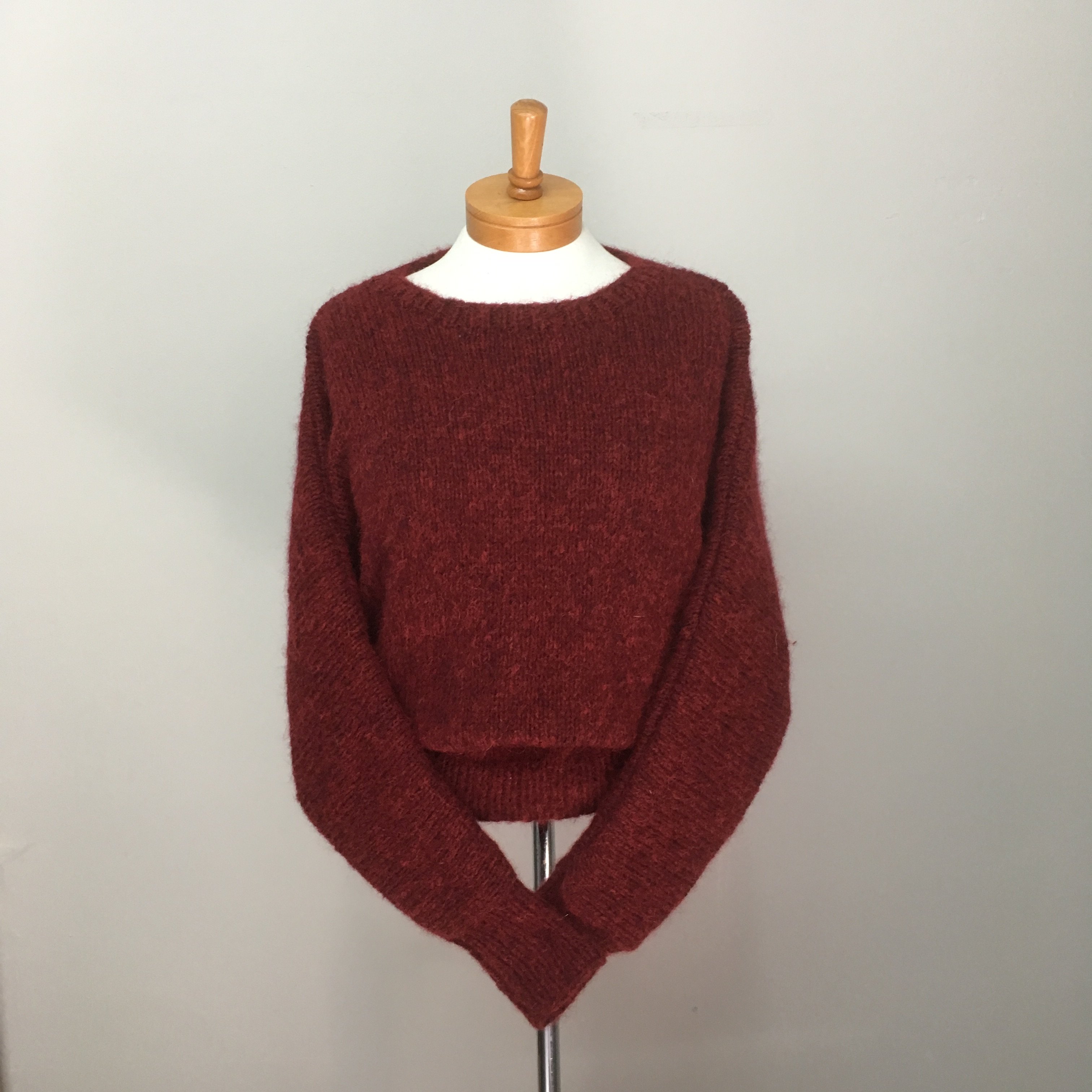 No hot date this evening, no plans to get down and boogie?
Feast your eyes on our fab free pattern... right on.
Follow this link to get this groovy jumper pattern, free with purchase of wool! 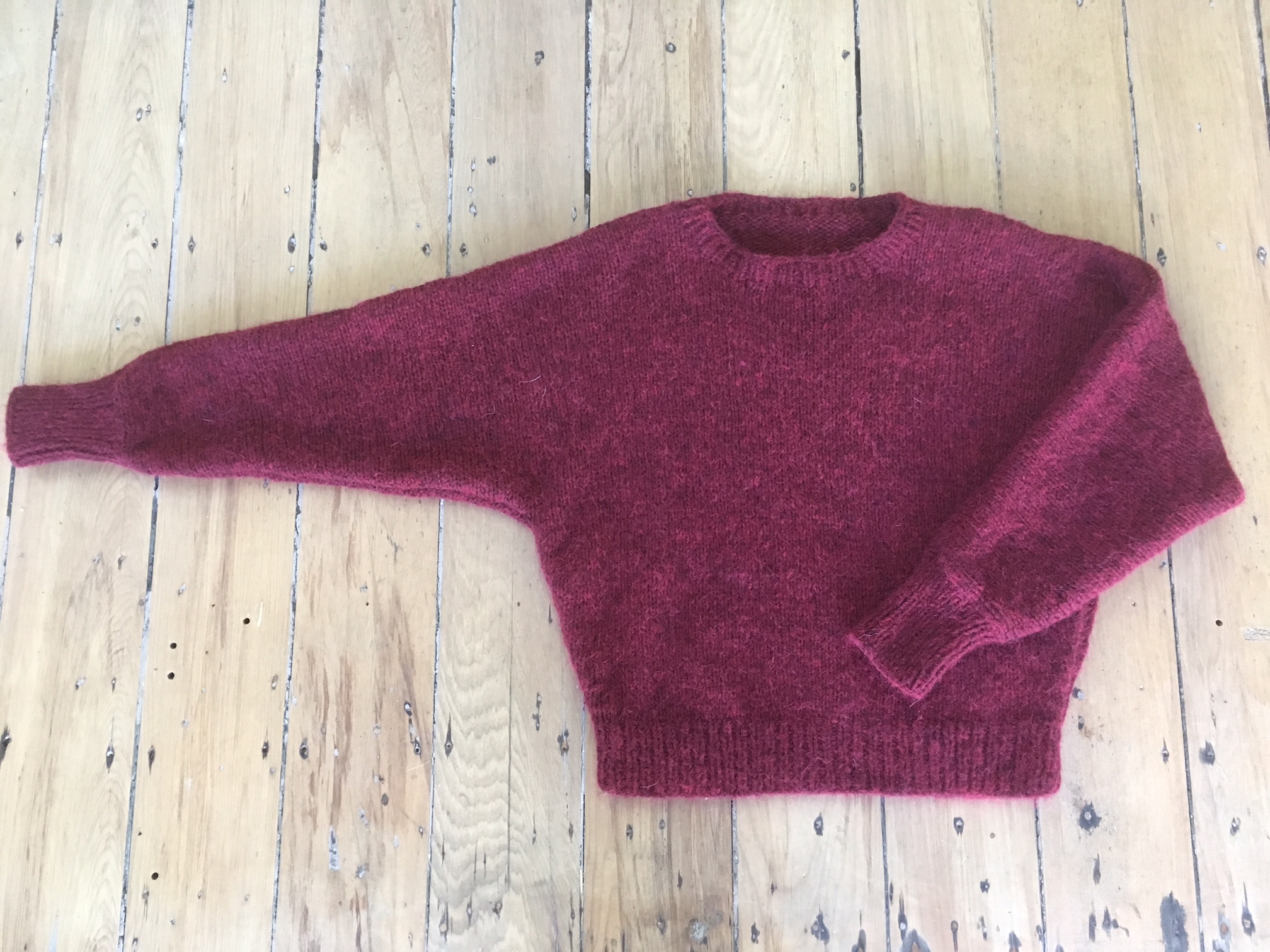 No Products in the Cart