MASSIVE SALE and wool shop in danger of being washed away! 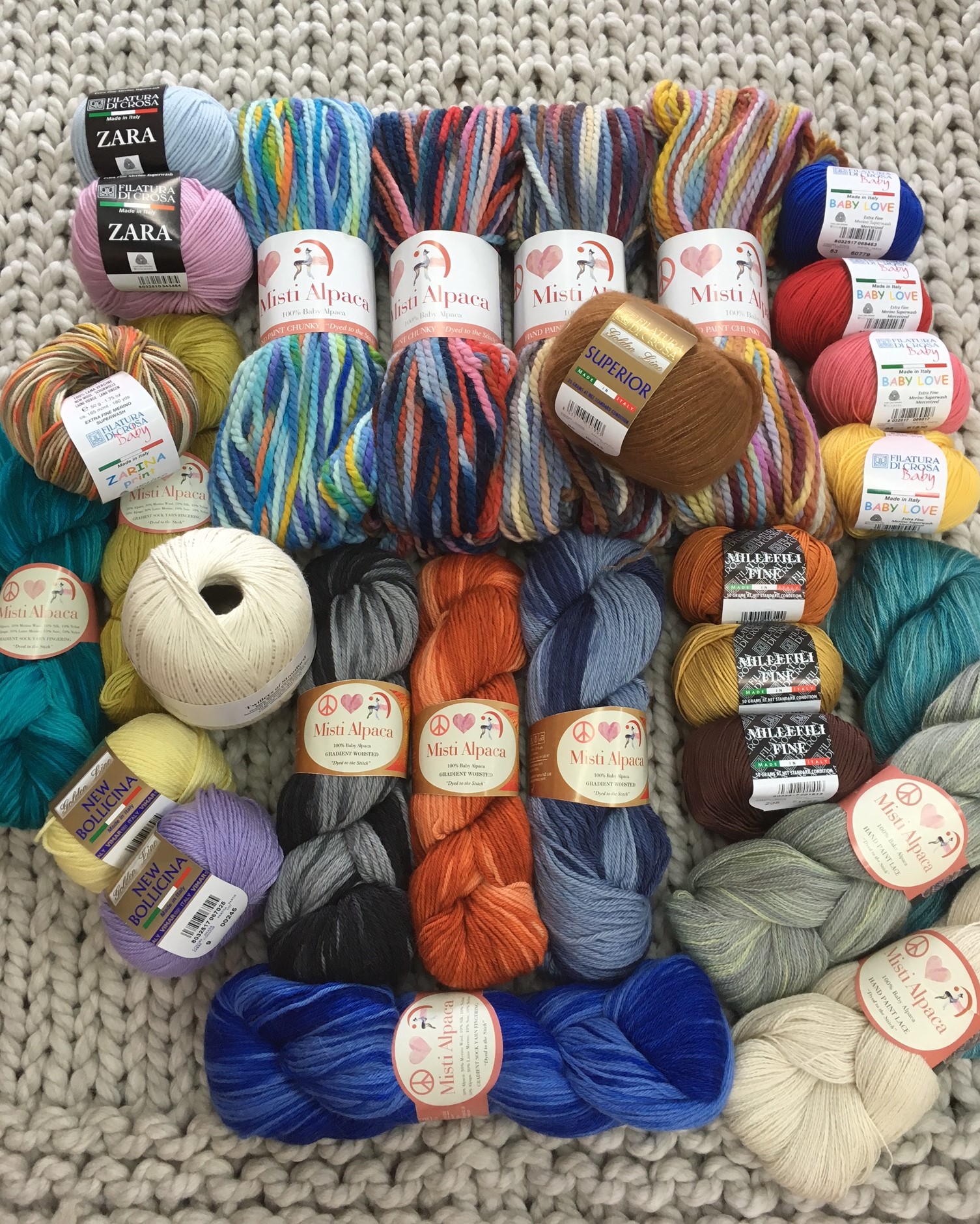 Can I temp you?

Starting this Thursday at 10 am, and continuing through 'till  4pm on Sunday, I will be holding our biggest Wild and Woolly Sale ever. As usual, all the yarns on offer will be of top quality but at rock bottom prices. Most will be in the region of one third of their  original retail price. I will outline the details further into this newsletter but first, here's a few 'ramblings'.

For those of you new to my newsletter, let me give you a brief introduction. You may have gathered, from meeting me in the store, that I hail from the Northwest of England. I have lived in New Zealand for the last 20 years, I am 'content', and, having moved countries three times, am not planning to move again. I do miss my 'home' so much though. England really is my home, it's entrenched in my heart, it's my heritage, my roots...golly it's so hard to explain, but every single day I miss the countryside, the canals, the architecture, the extremely old buildings, public footpaths, the pubs and most of all the sense of humor. I miss my Mum. Dad passed away late last year, now Mum's all alone in her little bungalow on the edge of the Peak Forest Canal, in a tiny village called Disley. I visit each year, I get my 'fill' of 'home' but it's only a 'Band Aid' the wound will always be there.

Just a few kilometers along the canal, which borders my mum's back garden,  you come to a quaint, small market town called Whaley Bridge. This historic settlement developed some 250 years ago as a result of Canal Mania. Mining was the main industry, and ore was transported along the revolutionary canal network from Whaley Bridge into Manchester, Leeds, Birmingham and London. The canal is now used for pleasure, holiday makers on canal boats leisurely put- putting along, dog walkers, cyclists, runners and ramblers making the most of the well maintained and idyllic tow path. The town has a bustling community. The main street is picturesque and quaint. It's managed to retain its post office, and its bank, and the high quality local retailers are appreciated, and supported, by the locals. Residents take pride in maintaining the character of their homes and gardens are well tended. Whaley Bridge is your quintessential English Village and it's my 'Happy Place'.

Whaley Bridge also is fortunate to have a wonderful wool shop. Wiseheart Studio.This wool shop was my sanctuary on my most recent trip home, last November. Dad had just died, my siblings, having cared for Dad in his final days, had returned to their homes in Australia. I was in charge of supporting and caring for Mum, I felt totally out of my depth. Thank goodness Wiseheart Studio held regular  Knit and Natters evenings. Kate, the wonderfully welcoming owner, offered comforting mugs of tea and slabs of cake, which enable me to switch off for a short time, and prevented me totally loosing the plot and collapsing in a hysterical heap. If you click onto their website you will see a a number of  photographs of  Whaley Bridge...the picturesque canal, the beautifully preserved shops and houses and the surrounding countryside.

SO...where is all this leading?

Every morning I read The Daily Telegraph online. It gives me my daily fix of 'England'. Last Friday the headlines made my jaw drop, I read in shock and amazement....'Peak District reservoir in danger of bursting dam and  flooding village'. The village in imminent danger of flooding was Whaley Bridge.  Apparently, heavy rain in the preceding days had completely filled Todbrook Reservoir, causing the excess to cascade over the spillway. This would not normally have been a problem, but as the torrent continued and escalated, the spill way started to erode and the concrete ballasts began to rip away, exposing and eroding the clay core of the dam. It soon became apparent that  if the  erosion continued 1.2 million tonnes of water would plummet down the valley and engulf homes, schools and businesses (including a wool shop) below.

Despite the breach occurring early in the morning, it appears that it was not until lunchtime that a local resident raised the alarm, and Police Officers and Fire Fighters rushed to the scene. All residents  and businesses in the town below the reservoir were evacuated, and an RAF Chinook helicopter arrived and began to drop hundreds of bags of sand  in an attempt to shore up the dam, and pumps were set up to reduce the water level. We are now in day 5 of the drama, thankfully,  it now seems likely that the water level of the reservoir will soon be low enough to rule out the horror of the dam collapsing and millions of tonns of water engulfing the town. It is hoped, that by the weekend, residents will be allowed to return to their homes and businesses reopen on the main street.

I did have a little laugh upon reading one newspaper report of the evacuation. A pensioner, Mrs Pass said "We had to get out in 10 minutes, the bells were ringing  and we didn't know why the bells were ringing."
"My daughter told me to "get out, get your passport and your medication."
"I've got a lovely house and a beautiful garden, I don't want to go." The pensioner explained she grabbed just her two dogs, her cat and her hair straighteners, (obviously she's not a knitter!) as she rushed to evacuate the village with over 1000 other residents.
"I've been holding it together for my daughter. It was terrible, the helicopter was coming over, you see the pictures on the television and realize it's real. I might loose my home"

Poor Mrs Pass,  you may think, but please let me continue with this report... The Dog Loving, Straight Haired, Non Knitting  Pensioner went on to say she saw the giant hole emerging in the slipway of the reservoir when she walked her dogs at 8.30 on Thursday morning. "I thought 'that's not right' and when I got home I thought I should call the police, I don't know why I didn't" she said !!!!!!!!!!!!! Would you really admit to such stupidity in a National Newspaper?

Toddbrook Reservoir with rather an alarming hole and a hovering Chinook
Ok, back to Woolly Stuff. Our sale will be on for four days and I believe it is our 'naughtiest' sale to date. If you take a close look at the photo' at the top of the newsletter you will get an idea of whats up for grabs.

All our hanks of Misti Alpaca are just $15 each, there's Hand Painted Chunky, 10 ply Worsted, 4 ply Sock and Lace weight. These yarns originally retailed for between $38 and $42  per hank.

Many of our wool's will be for sale by the bag of 10 balls, prices will be so low that you won't hesitate at treating yourself to a few bags.  There's 4 ply, 8 ply, 10 ply and 14 ply pure wool at just $28 per bag and some rather lovely Italian Merino 4 ply and 8ply at just $50 per bag. This merino normally  retails for $14.99 per ball. We will also have pattern books and knitting needles available at really silly prices. If you need to top up on some quality Japanese bamboo knitting needles, both straight and circular, or crochet hooks, I have plenty on offer at just $3 per item. These items normally retail for $16 to $20 a piece. See, aren't I good to you?

This really is a MEGA SALE, so how about winding up the newsletter with a photo' of some Mega Merino Wool?. These HUGE 800g balls of Natural Dye Free New Zealand Merino were originally $170 per hank. Yes, you don't need to have a check up at the optometrist....$170 per hank. There will be a whole pile of this wool on offer for Just $60 per hank and I have made a 2 hank blanket, using 25 mm circular needles, with  a pattern available if you fancy tackling some extreme knitting. 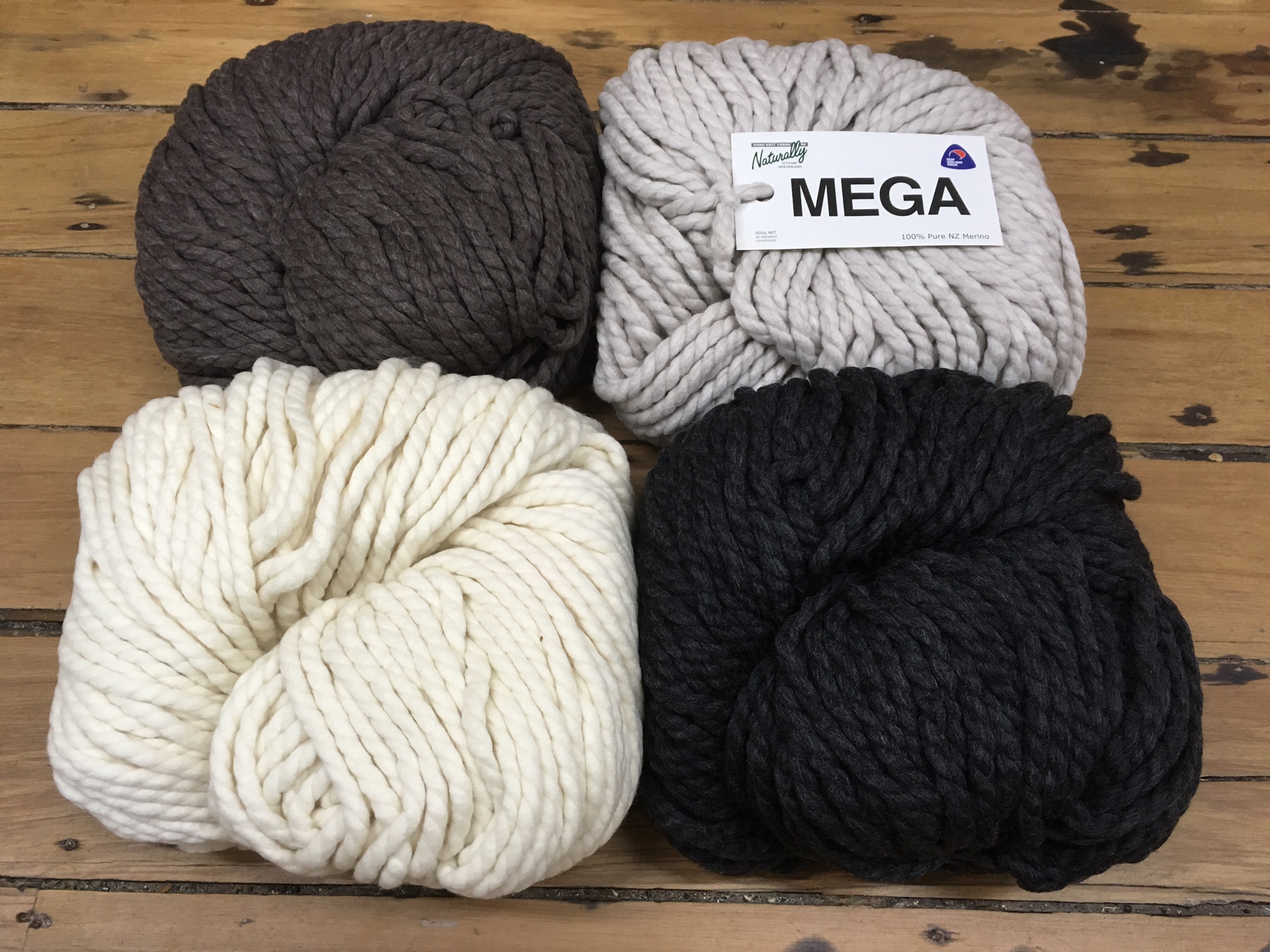 MEGA MERINO
See you at 10 am, sharp on Thursday.